Alfatestlab is equipped with a unique set of analytical techniques that allow the in-vitro demonstration of bioequivalence, through the measurement of physical properties such as API particle size, crystal habit or polymorphism, solid form, thermal properties, viscosity, yield stress. The following IVBE study has been carried out by Malvern Panalytical (UK), it illustrates the use of Morphologically-Directed Raman Spectroscopy (MDRS) and rheological measurements for the physicochemical characterization of acyclovir in order to compare reference listed drug (RLD) and the generic drug. 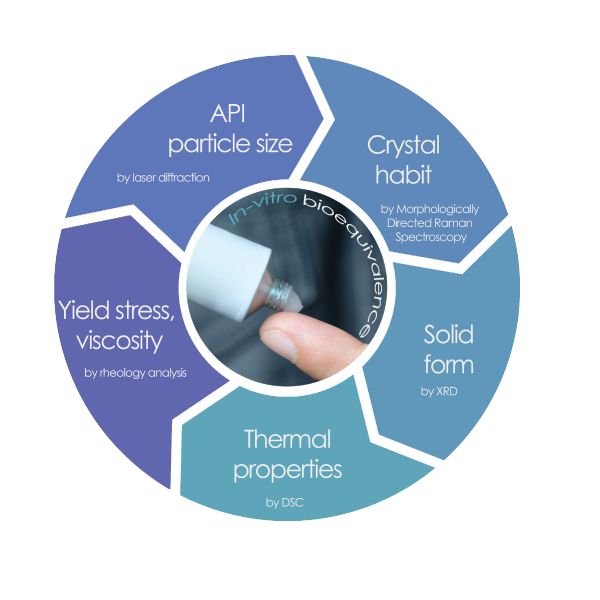 Topical pharmaceutical products usually take the form of lotions, creams, gel or paste and are used to deliver locally acting drugs to their sites of action. The generic versions of these drug products are in high demand and pressure is rising to develop these alternatives more quickly and more efficiently. One challenge in developing a generic version of a locally acting drug lies in demonstrating its bioequivalence (BE).

For locally acting substances the in vivo testing directly on site of action present some issues, require high patient numbers (sometimes larger than the originator’s efficacy study), are costly, time-intensive and may still not be sufficiently sensitive, given the potential variability of factors such as exposure time and size of application area. Furthermore, the inability to detect formulation differences makes these studies only confirmatory of local equivalence.

For these reasons, alternative strategies, such as in vitro bioequivalence (IVBE) testing, are being explored to provide new approaches for generic product equivalence. The in vitro methods to assess bioequivalence links the physical and chemical properties of a drug with its efficacy.

The US Food and Drug Administration (FDA) sets out three levels of equivalence requirements (1).

The general pathway that FDA has adopted for bioequivalence testing of locally-acting topical dosage forms applies Q3 microstructural equivalence, where differences between the same components (Q1) in the same concentration (Q2) can be related to the arrangement of matter and/or its state of aggregation (2) (3).

In FDA guidance is reported the approach for in vitro bioequivalence testing of acyclovir that include the following physicochemical characterizations for each generic and RLD products:

In-vitro testing allow considerable cost savings and a faster time to market. Starting from acyclovir in-vitro bioequivalence example, let’s have a look at the testing required for topical creams and the corresponding analytical techniques necessary.

MDRS is used to determine the polymorphic form of the API in the formulation, particle size and crystal habit. MDRS technique combines automated static particle size and shape with chemical identification of individual particles, enabling the generation of specific component size and shape distributions.
Figure 1 shows how MDRS technique has been used to characterize acyclovir. The first step is the automated morphological analysis of the sample that provides particle size and shape parameters for each particle. Raman spectrum is then acquired on each particle. From the particle spectra generated, it is possible to identify API particles and confirm the correct crystal form in the formulation, in this case acyclovir 3:2 hydrate form. It is then possible, based on the spectra generated for each particle, to automatically create a particle class corresponding to the acyclovir 3:2 hydrate form.

Figure 2 shows volume-based particle size distribution of the specific API particles. Once particle classes have been established, MDRS can be used to determine particle size distribution of chemically-identified API and excipient. This study shows that the API particles in the generic formulation are smaller than those in the reference formulation. This can affect the bioavailability of the API.

Rheological characterization can outline differences between topical formulations, providing useful information on their quality and performance such as processability, spreadability and patient compliance. Understanding the rheology of a topical product is essential in controlling and optimizing the physical properties that deliver the appropriate stability, texture, drug release and appearance.
Topical cream behaves like solid at rest, the yield stress is the stress that must be applied to break down this structure and cause the material to flow. The higher the yield stress the more solid like the structure. A cream with higher yield stress will need more force to be squeezed from a tube but will better retain its structure when applied to the skin, so that a greater amount will remain at the desired location.
Figure 4 shows yield stress results for the RLD (blu) and generic (green) acyclovir products. The generic shows a much lower yield stress than the RLD, proving to be less thick. 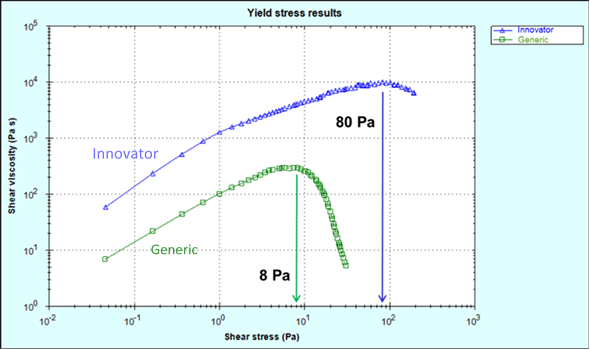 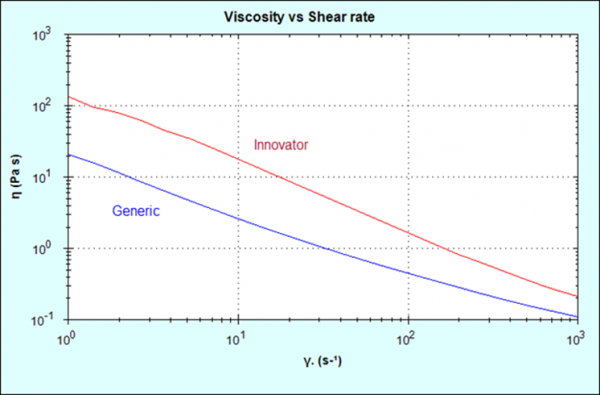 Figure 5 shows viscosity as a function of shear rate for the RLD (red line) and generic (blu line) products. In both samples viscosity decreases as shear rate increases, indicationg a classical shear thinning behaviour.  The RLD has a higher viscosity than the generic across all shear rates and is likely to flow less readily and spread less easily in use. It will likely to hold its structure on application site and stay in place for a longer time, potentially providing more effective treatment.

In vitro bioequivalence is of large interest across the generic drug industry. In vitro bioequivalence studies for locally acting product are recommended by FDA. Generic drugs approved by the FDA need to meet the same rigid standards as the RLD.
FDA guidance covering topical acyclovir defines the criteria that must be met for formulations to qualify as suitable for IVBE studies. Important among these is that the generic and RLD products have to be physically and structurally similar based upon an acceptable comparative physicochemical characterization (Q3).
Taking acyclovir cream as an example, this article presents data obtained using two key technologies: MDRS and rotational rheometry. MDRS is a non-invasive technique that requires minimum sample preparation and manipulation. The combination of automated particle imaging and Raman spectroscopy allows the individual components present within a drug product to be independently characterized and compared.
The data obtained give the information required to compare the properties of RLD and generic forms and demonstrate the power of these techniques in providing real insight into topical products and their behaviours.