The dissolution of a drug from a dosage form, such as tablet or capsule, is important for its bioavailability and therapeutic efficacy. When delivering an active ingredient orally, it must first dissolve in gastrointestinal fluids before it can then permeate the membranes of the gastrointestinal tract to reach systemic circulation. Poor solubility and low permeability are the most frequent barriers of oral bioavailability of drugs.

Drug solubility has one of the highest impacts on the desired concentration of a drug in systemic circulation, and therefore whether or not the drug will have the desired impact on pharmacological response in patients. Drug solubility is defined as the maximum concentration of a substance that can be completely dissolved in a given solvent at a certain temperature and pressure level. The solubility of a drug is directly tied to the particle size and surface area. When particle becomes smaller, drug particles have greater interaction with the solvent due to their thinner diffusion layer and increased surface area. Reduction of the particle size in fact often appears to be the first and easiest way to enhance drug dissolution rate.

Alfatestlab was recently asked by one of its customers to analyze 3 batches of an active ingredient (API) to determine why the dissolution rate of one of them had changed even though produced with the same identical process.

To fully characterize the API batches, a combination of tests was performed: particle size and shape analysis plus BET surface area analysis.

Volume-based particle size distributions (Figure 1) reveal clear size differences between batches: samples 002 and 003 show a more polydisperse distribution and the lowest Dv10 value (Table 1), due to a population of fine particles smaller than 10 µm, much less represented in batch 001. 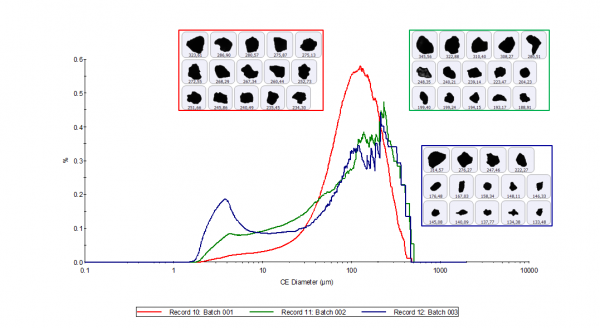 Size distributions based on particle number (Figure 2) confirm that batch 001 has fewer fine particles than the other samples (Table 1). These results are in agreement with the dissolution tests that evidenced a lower solubility of sample 001 compared to samples 002 and 003. 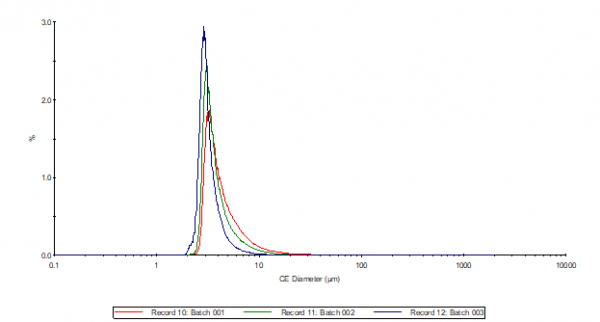 Finally, the shape of the particles was characterized. Comparison of the morphological distributions showed no significant differences, confirming that the production process did not undergo changes that affected the shape of the particles. As an example, the distribution of HS circularity in number is shown in Figure 3, confirming no significant shape difference between the samples. 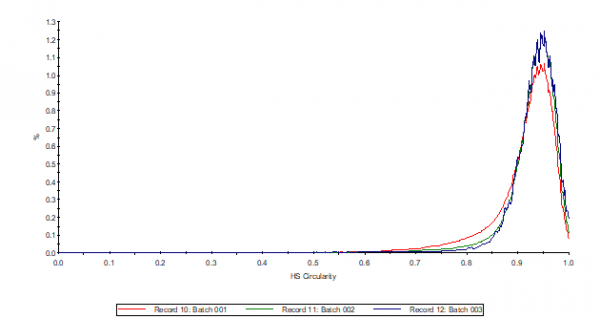 This study revealed that particle size distribution and then surface area, were responsible for the different dissolution behaviors between the 3 samples. The process did not affect particle shape, particles showing  quite similar circularity in all 3 batches.