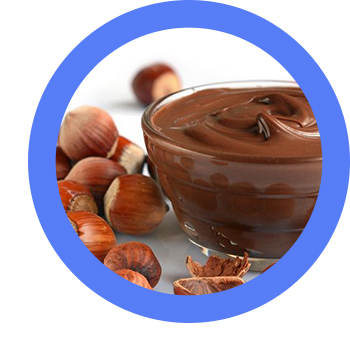 Sensory analysis is an efficient tool to compare competitors’ products to the target leaders’ one in the market, to develop a new product or to improve a current one.

In this study, 4 brands of chocolate hazelnut spreads (A, B, C, D) were characterized to compare their aroma profiles. Sample A is considered as the reference. This comparative benchmarking is extremely useful for our customers to improve, re-formulate or re-engineer their products.

The comparison of the chromatograms obtained with the e-nose shows some significant differences between the aroma profiles of the four brands (Figure 1). 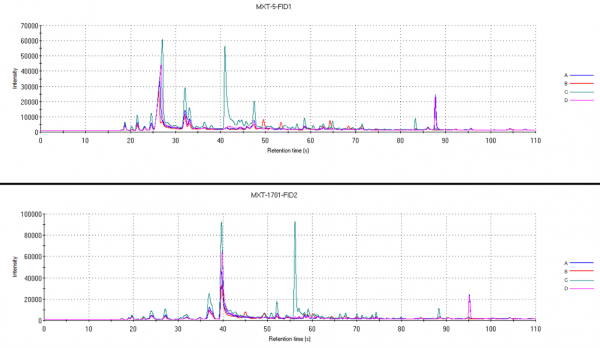 Figure 1 – Superimposed chromatograms of four samples of chocolate hazelnut spreads, obtained with the 2 different polarity columns of the e-nose.

To graphically visualize the differences, an odor map based on Principal Components Analysis (PCA) was generated based on all volatile compounds detected in the headspace of the samples (Figure 2).

Both x- and y-axis show the variability of the samples. The closer the samples the more similar they are. In this analysis, sample B is the most similar to the reference A, followed by sample D, while sample C is the most different, as shown in the graph in Figure 3. 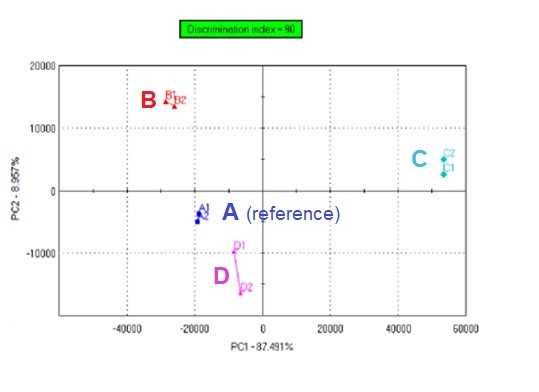 Fig.2: Odor maps of chocolate hazelnut spreads based on Principal Component Analysis (PCA) with all peaks 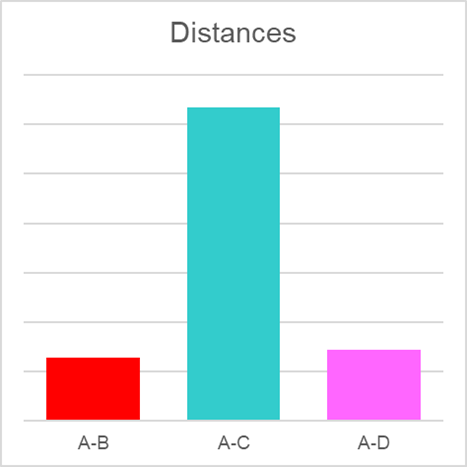 Fig.3: Graphic representation of the differences (distances) between B, C, D chocolate hazelnut spreads compared to the reference A

Investigation of Chemical Composition of the Odor

The e-nose instrument is based on ultra-fast gas chromatography and monitored by AlphaSoft software equipped with AroChemBase module: it consists of a library of chemical compounds with name, formula, CAS number, molecular weight, Kovats retention Index, sensory attributes and related bibliography.

In addition to classical chromatography functionalities, the technique is thus able to provide chemometrics data processing tools such as sample fingerprint analysis for comparison, qualitative and quantitative models, quality control charts. It allows pre-screening the chemical compounds and giving sensory features by directly clicking on the chromatograms‘ peaks.

The nature of the most discriminant volatile compounds involved in chocolate hazelnut spreads flavor was investigated using their Kovats index and ArochemBase database (Table 1).

Table 1 - Identification of the most discriminant compounds using ArochemBase

Discriminant compounds are evaluated based on a comparison of peaks’ area, as shown in Figure 3.

The proportion of the major peaks responsible for the aroma differences is different between the samples as shown in Figure 4.

2,4,5-trimethylthiazole, a flavor component in many cooked foods, was possibly identified as the most discriminant volatile compound for sample B respect to the reference, while Butanethiol for sample D. Sample C, the more distant from the reference, is characterized by a higher content of 2-Methylfuran, Butanethiol, Ethyl pentanoate and Triacetin. 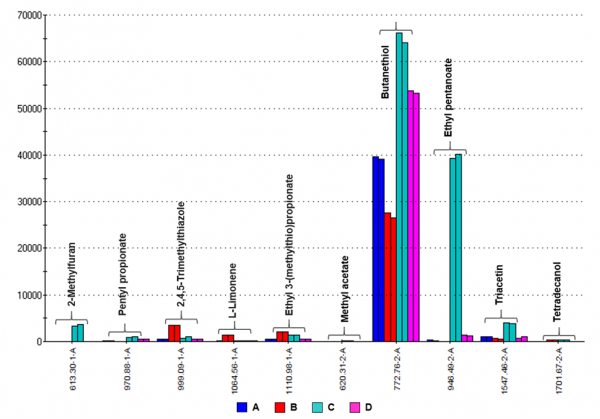 2,4,5-trimethylthiazole, a flavor component in many cooked foods, was possibly identified as the most discriminant volatile compound for sample B respect to the reference, while Butanethiol for sample D. Sample C, the more distant from the reference, is characterized by a higher content of 2-Methylfuran, Butanethiol, Ethyl pentanoate and Triacetin.

The sensory analysis by electronic nose is an efficient tool to evaluate the aroma profile of food products and is well suited for benchmarking and shelf life studies. It is a valuable tool in a variety of other industries (packaging, plastics, cosmetics, etc.) with applications in product development or quality assurance as:  sensory control of raw materials or final product, Investigation of consumer claims or defects, packaging interaction control, influence of process change on sensory quality.

Contact Alfatestlab to discuss your sensory analysis needs and discover how we can help!