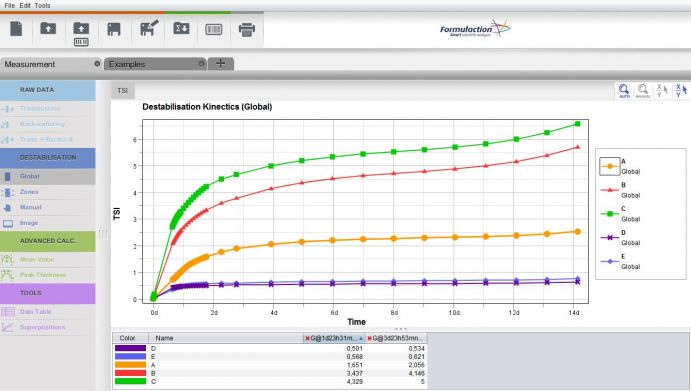 Alfatestlab provides analytical techniques to understand instability phenomena revealing and quantifying them quickly and objectively . Synergistic and complementary techniques such as the multiple light scattering technique (MLS) and the electrophoretic light scattering (ELS) for the measurement of the Zeta Potential, combined with rheological and particle size characterization techniques allow a complete understanding of your products and their stability over time or temperature.

The analysis of the physical stability of suspensions, emulsions and foams is of fundamental importance to improve and guarantee the performance of a commercial product. The destabilization of liquid dispersions is typically due to flocculation or coalescence phenomena (modification of dispersed particle) and/or sedimentation or creaming (migration of particles downwards or upwards, respectively). Understanding and measuring these phenomena are fundamental both in the formulation of new products and shelf-life studies, in different industries. In most applications the goal is to obtain a stable product over time; inversely, for specific applications, the destabilization of the dispersion is a key process to obtain the desired result. An example is given by studies conducted in the field of drinking water purification and wastewater, where it is extremely useful to verify and monitor the effectiveness of flocculants (polyelectrolytes) and their correct dosage in the plant.

Using MLS technique, we analyze destabilization at the microscopic level, providing a complete reports showing destabilization kinetics, highlighting the differences between formulations and ranking them from the most stable to the least stable on the basis of a single number.

Alfatestlab ca provide a complete characterization of the destabilization phenomena by tracing trend graphics of:

By measuring the Zeta Potential of colloidal dispersions, we characterize the electrostatic stability of your sample, indicating the prevalence between repulsive electrostatic forces, which tend to maintain a dispersion stable over time, compared to the attractive ones like Van Der Walls, which push the particles or droplets to aggregate between them. For aqueous dispersions, a high zeta potential value (ie <-30mV and> + 30mV) means that the nanoparticles remain far from each other, far apart enough to eliminate the possibility of agglomeration, aggregation and / or flocculation. The measurement of the zeta potential thus provides a simple measurement for predicting the stability of aqueous dispersions.

Request information for this analysis